Officially, my weekend started at lunch Friday when I decided to carbo-load at Five Guys Burgers and Fries with my friend, and fellow runner, Jenny.  I love their fries absolutely soaked in malt vinegar.  I've had this meal prior to several half marathons and it's worked well.  Here's hoping...

The Centerpoint Half Marathon was scheduled to start at 7:00 but was delayed about 10 minutes.  I think this was an omen of things to come.  It was 35 degrees, the sun was NOT shining, and there was a stiff wind.  Holy cow it felt cold.  I've raced in much colder temps so it had to be the wind.  I had dressed in my typical tank top and arm sleeves but thankfully I had a pullover in my car.  I make a quick change and never regretted it.  One of my feet and both of my gloved hands and were numb when the race finally started and stayed that way for half the race.

This was half #2 of my series of 4.  It's a smaller event and my third time participating.   It's not a flat course but the hills are manageable. I always start slow and then speed up after a few miles of warm-up, aiming for a negative split.  I wanted to run faster than last week but not tire myself out completely as I need to remain strong for the next 2 races.

The first two miles were too slow at around 9:40.  I had a little trouble getting in the groove.  As per usual, I zoned out and can't give you the per mile details.  At the halfway point, I calculated (you know how I love that math) a 2:04-2:05 finish.  Realizing I had gone out too conservative and could not set a PR, I decided to not overdo it and continue steady with my current 9:20-ish pace.

No knee pain, no side stitch, no foot cramp, no hip pain - I can't complain at all about my body!  {Thank you, body.  I know I don't treat you well at times.  And, sometimes you do amaze me!}  Keeping my stride short is definitely the trick for keeping my IT band/knee issues at bay.  I finished feeling fantastic at 2:04:48.  No, not a stellar performance, but 6 minutes faster than last week!  A little niggling, annoying part of me wishes I had pushed harder, especially in the beginning.  Hopefully, this sets me up well for the third race next weekend.

For a smaller race, the crowd support is wonderful. The church that hosts the race does an excellent job.  There are about 65 turns, all manned with volunteers.  There are cheer stations, music stations, and signs galore.  My favorite was the over exuberant cheerleaders who formed the human tunnel.  Running through that was a fantastic motivator.   There was a great band to entertain us afterwards plus plenty of food items to choose from.  I ate peanut butter balls, fruit, homemade trail mix, sausage balls, and a mini cupcake from the many options available,  And I stopped at Starbucks, of course.

As for the race timing company...they had most everyone's age and gender mixed up!   After waiting for an eternity, they still had not figured it out and the director announced they would mail the awards.  It didn't matter as I was 4th in my age group.  Even after they posted the official results later that day, there were still people in the wrong categories.  Utter disaster.  How can you get it that wrong?


Bad timing aside, this is a GOOD small-town race.  I would definitely do it again.  However, I hope they will pick a different timing company next year.  There are several in the area to choose from.

The remainder of Saturday was spent attending a baby shower and working for a while -- a long day.  Sunday was spent doing the usual chores and grocery shopping.  After that, I visited an ailing out-of-town family member -- another long day.  I'm glad the weekend is over so I can rest.


Tell me about your weekend.
Do you have a favorite pre-race meal?
Have you experienced bad race timers?

Thank you Tara for hosting Weekend Update!  Check out her blog as well as the others who linked up. 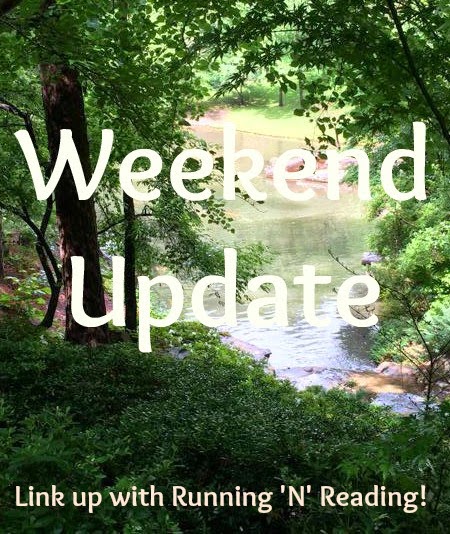 Posted by HoHo Runs at 6:15 AM
Email ThisBlogThis!Share to TwitterShare to FacebookShare to Pinterest
Labels: running, female, masters Centerpoint Half Recap