It's time for a mid year check.  Wow!  Where did the year go?  There were five things I wanted to achieve this year.  Let's see how it's coming along...


1)  Run My First Marathon  --  IN PROGRESS.  I've just started training for the Chicago Marathon in October.  I was delighted to be selected through their lottery system.


2)  Run a Half in a New State  --  COMPLETE.  I ran the Viking Half Marathon in Mississippi.  It was a chilly but sunny March morning in the quaint city of Greenwood.  The route was nice and flat but the portions on the brick streets were quite challenging.  The movie The Help was filmed there in 2010.


3)  Incorporate Strength Training  --  EPIC FAIL.  I woke up the day after Christmas with severe elbow tendonitis.  The orthopedist said I would remember this year as the year my elbow hurt.  Oh, Joy!  I've endured two painful steroid shots so far.   The last one did not take away the pain, but thankfully lowered it from excruciating to tolerable.  As long as I can sleep, I can manage.  Obviously, a revision is needed.  I can't even squeeze the shampoo bottle, much less pick up a weight.  The thought of a pushup makes me break out in a cold sweat.

4)  Run A Double or A Series of Half Marathons  --  COMPLETE.  I ran 4 half marathons within 21 days this winter.  While not technically a multi-day series, it allowed me to move up a moon level in Half Fanatics, which was the end goal.  Call me Jupiter. 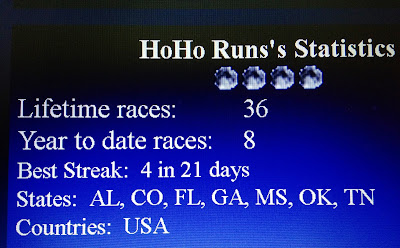 ﻿﻿﻿﻿﻿﻿5)  Run a Sub 2:00 Half  --  NOT YET.  I have not trained to do this.  The 8 halves I ran early this year were so close together I didn't work on speed.  Maybe I can pull a rabbit out of the hat toward the end of the year, but my focus is now on distance.  Unfortunately, I may have to put this one on hold until 2016.  I'm busy ticking off marathon training miles in the challenging heat and humidity of summertime in Dixie.  It's my life for the next 14 weeks or so.

How are you coming with your 2015 goals?

What would you do about strength training? 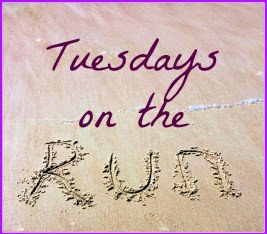 I'm joining the Tuesdays on the Run link up!
Thanks to our hosts:
Ericka @ MCM Mama Runs,
April @ Run the great wide somewhere
Patty @ My no-guilt life!


Posted by HoHo Runs at 6:59 PM
Email ThisBlogThis!Share to TwitterShare to FacebookShare to Pinterest