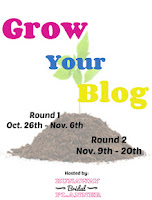 I'm participating in the Grow Your Blog Hop hosted by Runaway Bridal Planner.  Today is a spotlight day for me.  If you are new here, I certainly appreciate you stopping by and hope you'll return.

In the spirit of getting to know one another, I thought I'd share a few things about me.  It's also time for the Friday Five, so let's just kill two birds...so to speak.

I Was Raised On Country Sunshine (Dottie West)


I was born and raised in the rural south.  We had a large garden and summers were spent picking, shelling, shucking, and snapping.  We had a pumpkin patch long before that was considered cool.  One of my favorite things was to feed the cows with my Grandfather.  He let me sit in his lap and drive his truck to the pasture.  We had no cable TV, certainly no video games.  We did have a telephone...and it was on a party line (Google that!).

I liked to read and we'd go roller skating in town, but we (kids) were often bored.  The standard response to our complaining was "Go Play Outside".  So we did.  We biked the rural roads and trails in the woods.  We used an old swing set frame as a gymnastics apparatus.  Ask me how many times I've had the breath knocked out of me {with chocolate cake in my mouth too!}  We played on the tractor.  We played in the dirt.  We used our imaginations.  Even in my 50's, my favorite thing is to Go Play Outside.


Although I had many years of piano lessons and a few years of dance lessons {...bahaha}, I was a tomboy.  Weekends were spent in a cabin on the backwater.  I played, fished, swam, and water skied with such vigor that my lungs would ache.  But, I would not tell my Mother for fear she'd make me stop.  I'd fall into an exhausted sleep and do it again the next day.  Later we spent summers and holidays at the Gulf of Mexico.  It's abundantly clear where I get the urge to be in-near-on a body of water!


I met my husband on Halloween.  He was Dracula and it was love at first bite (sorry, couldn't resist).  We have three sons, one DIL, two grandkids and two weird dogs.  I have a BS in Business Management, not to be confused with Human Resources.  My education was all about numbers.  I've worked in Accounting/Finance all of my life and run a specialty finance company.  {Yawn}

Our house is the hub of family fun and chaos.  I wouldn't have it any other way. We spend warm weekends in the backyard and on the lake.  I still slalom waterski.  Who's old?  Fall weekends are focused on college football.  Winters usually still include a Disney visit, even though our kids are not little anymore. We take a few yearly trips and still frequent the Gulf.


Running Down A Dream (Tom Petty)


Although I water skied every Summer and had quite the collection of Kathy Smith workout videos (anybody?), it wasn't until much later in life that I became more active and eventually discovered running.  I started on the gym's treadmill in the Winter of 2008, after getting bored with the elliptical machine.  I was amazed that this gawky girl with the gangly arms and legs who was excused from PE all of her life could run!  I credit our love of Disney World for the motivation to run my first half marathon -- also the first race I ever signed up for.  I received an email about the WDW Marathon and Half.  "What's that?" quickly became "I can do that!"  And that, I did.


The Race is On (George Jones)

I've run 142 races of varying distances but the half marathon is my favorite.  I've run 36 halves, completing 17 in 2014 alone.  I am currently finalizing a foot injury that caused me to DNS the Chicago Marathon.  I've cycled and run crazily in the pool to maintain my fitness.  I'm curious to see how well that worked as I'm registered for the WDW Marathon in January.  {Fingers crossed!}

I currently co-host the Weekly Wrap with my friend Tricia.  It was created with the goal of connecting with and supporting other active women. The link is open from Sunday through Wednesday evenings.  We'd be honored for you to join us.  You just might meet a friend for life!  As a bonus, you can also earn multiple chances to win a wonderful prize.

What motivates you to try something?


I'm linking up with the lovely ladies of the DC Trifecta.

Courtney from Eat Pray Run DC,
Cynthia from You Signed Up For What?!
Mar from Mar on the Run!. 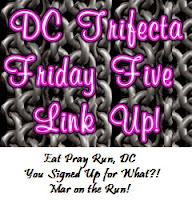 Posted by HoHo Runs at 7:50 PM
Email ThisBlogThis!Share to TwitterShare to FacebookShare to Pinterest