Tricia and I are thrilled that new ladies continue to join us here on the Weekly Wrap.  If you link early, please make sure you come back later in the week.  You may just find a new friend for life!


When I left off (The Prequel), the fireworks had gone off and I was on my way.  My official start time was 5:52.  My feet and hands were completely numb.  The weather - with that cold stiff wind - was brutal.   I did not regret my decision to wear extra layers.  I saw runners in towels, blankets, bathrobes, garbage bags, and heat sheets. It took four miles for my hands and feet to wake up.  After being numb for so long, that was painful. 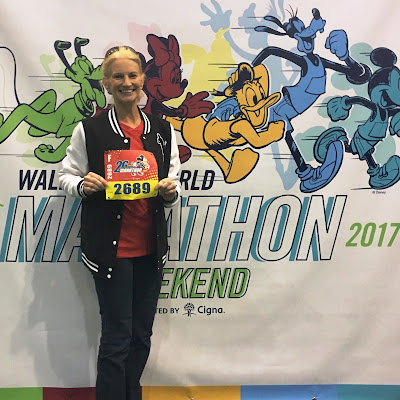 My strategy?  I'd just have to take it one step at a time. My lower back and hip had been hurting for weeks. It's an old water skiing injury but unusual to be pulling so much in the hip.  I gave serious consideration to DNS-ing.  I desperately clung to the hope that it normally doesn't hurt when I run (just doing everything else!).  But 26 miles?  I would be a fool to think it wouldn't hurt at some point.


The first miles were about jockeying for position.  I had to get away from the large 4:30 pace group whose run/walk method was causing extra weaving for me.  Later, they came up from behind during a very narrow section. Someone pushed on my back for a few seconds .  Was I supposed to move?  I'm biding my time to pass people.  They should do the same.  And do not touch me!  My blood boiled for a little while. They never passed as they slowed again to walk.  Thankfully I never saw them, or felt them, again.


Disney is all about entertainment!  There were marching bands, cheerleaders, DJs, energizing music and those much-anticipated character scenes.  I have now run four Disney races and have never stopped for a picture {GASP!}.  I can't wrap my brain around standing in lines that deep.  I do find the character stops to be a delightful distraction.  I was disappointed not to see the hot air balloon this year and assumed it's absence was weather related. 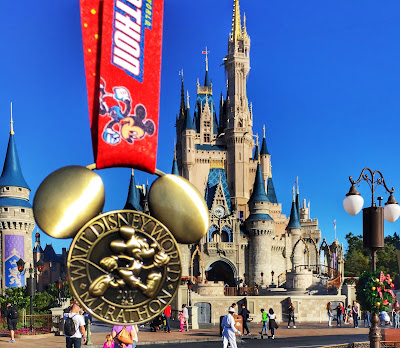 First up, Magic Kingdom.  Running down Main Street is breathtaking.  The roaring crowds, the epic Disney music, Cinderella's Castle frosted against the predawn sky -- it's magical.   The conductor blew the train whistle as I crossed the tracks in Frontier Land.  That brought back a special memory from my first half!  I felt the race really started after exiting the park.  Back on open roads, it was easier to run and time to get to work.  There were several miles to zero in on pace before the next park.  The sun rose and it felt even colder for about an hour or so. I have to give major props to all the volunteers and spectators standing in the cold wind for hours on end!


For our arrival at Animal Kingdom, they had a variety of animals out to welcome us -- some in cute costumes!  This is the most challenging park with it's narrow, uneven, curvy pathways.  But, there is not a lot of time spent here.  When I crossed the timing plate at the halfway point, I saw 2:13:xx on my watch.  Could I negative split the race?   Wait!  Hold.The.Phone -- I'd be thrilled with an even split!  I can do this!  There was a sizeable crowd at the park exit and their cheering provided a great energy boost.

After more highway miles, my least favorite section came next.   In my opinion, too much time is spent on the ESPN Wide World of Sports property.  Other than a quick lap around their super cool running track and Braves practice field, most of the running is on sidewalks.  Narrow. Winding. Concrete. Around and around.  The mile 20 marker was a beautiful sight as it signaled the end of this section.  It's here I start to think - I did it!  The worst part was over. 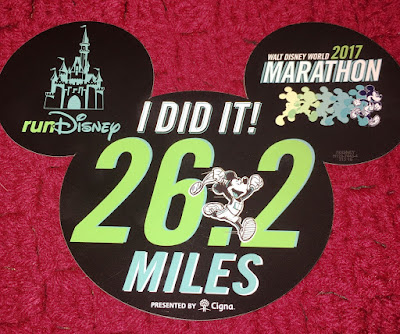 Blessedly back on the highway and after a much appreciated uphill exit ramp (where my heart went out to a fallen runner), we entered Hollywood Studios.  Seeing my favorite Tower of Terror made me smile.  I knew they would be giving out candy and had been anticipating this for miles.  {It's the little things.}  I grabbed a pack of Crispy M&M's.  But...couldn't open it.  Whaaa?  After an eternity, I gave up and stuck it in my top.  I finally got a Tootsie Roll opened and popped that in my cheek.  Heaven. It stayed there through the finish line.  That trickle of sugar was exactly what I needed to get through the last few miles.

There it was.  The Ball.  Spaceship Earth.  One more turn, the choir in their golden robes singing We Are The Champions, and  --  the finish line.  I high-fived Donald.  {Where is Mickey when you need him?}  With a quick wave to a shouting PoPo, I kept moving through the long chute.  I stopped for an official photo and was handed a snack box and two bananas.  In the reunion area, I found PoPo who had my favorite Starbucks coffee waiting.  I gave him a tearful hug, guzzled that latte and finally ate those damned Crispy M&Ms. 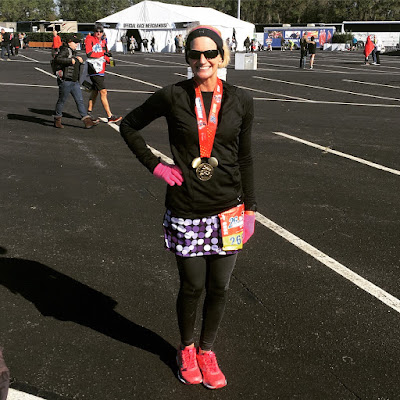 Disney is big on fun and will never disappoint.  It was not easy.  In fact, I don't consider any race easy.  It's about pushing to your limits, accepting the things you can't control, and managing your own personal and unique struggles on any given day.  Each section had it's challenges.  The park paths are narrow, some hair-pinned and uneven. And all that ESPN concrete?  Quite the test.  The course flatness is also difficult.  The constant pounding using the same exact muscles in the same exact manner wears on you.  I missed the ability to push on an uphill and rest on a downhill.

As expected, I was aware of my back and hip after about an hour.  I made a conscious and continual effort to shorten my stride.  It was manageable and I never walked a step.  I appreciated the ability to be doing what I enjoy most.  Since it was cold, I only drank at half the water stops: mostly Gatorade, some water.  I ate my typical 4 peanut butter GUs and twice took an offered banana.  I find them easy to eat as they need little chewing, although I don't eat the whole thing.

I was thrilled with a 13 minute PR.  You may remember, I fell during my last marathon.  I know without a doubt, I did not spend 13 minutes being bandaged at the aid station.  So, I feel very good about the progress I've made at this distance.  It got incredibly, deep-digging tough but I did not fall apart.  I was pleased with my endurance, even though my back and hip were uncomfortable for the majority of the race.

I was grateful to be running.

And...wait for it...I loved each and every step!  Surely you knew that was coming!

What are your thoughts about the pace group pusher?