Last year I thoroughly enjoyed the 2016 Soldier Half Marathon and vowed to run the marathon this year. Well...that didn't happen.  Other plans were made and revised.  Life happened.  Injuries happened.   I am a little disappointed as this was the last year they'll offer the full distance. Originally scheduled to run Vegas, I doubted I'd be able to fit in this half.  But when Vegas didn't happen, I thought...maybe.  Throw in the fact I found out my southern sole sister Teresa and her Major Hubs were going to run it and that "maybe" became...well heck yeah!

Due to the time zone difference, this race required a crazy early wake-up call.  Even so, I prefer sleeping in my own bed.  I arrived one hour beforehand.  I would need to find parking, go through security, register and get my swag, stand in the restroom line, walk back to the car, go back through security, and get to the start line. These logistics are what make me nervous -- never the race itself.  Let's just say there was a bit of a fiasco at registration which left me with little time to spare.  I was glad to get a hat because I forgot mine!


I connected with Teresa and Hubs and we lined up in the middle.  It was about 40 degrees but would warm up quickly.  I had a throwaway long sleeve T-shirt on; split up the middle for easy removal.  Teresa and I ran together for a bit.  Knowing the famous Drill Hill began in mile three, I wanted to run easy until I crested it. Surprisingly, it was not the same big hill as last year.  In fact, the course was different in the early miles. No worries -- they threw in a suitable replacement hill.  Although it was much longer (a full mile up) it didn't seem as steep.   The Drill Sergeants were there to help us to the top.  One fell right in step with a guy to my right.  I'm happy it was not me.  I giggled at his choice of words and kept running...a bit faster! 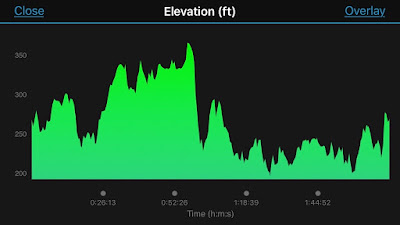 While running the few miles on base, I heard what sounded like gunfire a couple of times which was a bit unsettling.  You have to remember this is a true military base.  Their training would not stop for us.  I am very appreciative of the many, many soldiers who worked this event.   My favorite segment was the big down hill.  Yep, those Drill Sergeants were there too!

Being my first half since June, I had no expectations of being anywhere near a PR.  After a year with various injuries and time off, I ran the Battleship 12k last weekend at a 9:31 pace and hoped that would translate to a solid effort below a 10:00.  It did.  My average pace was 9:51.  Sadly, the altered course measured a quarter mile too long so my official time will not reflect it.  {Pet Peeve -- don't get me started!}  I actually don't know my official time as I didn't check at the race and they haven't been posted.

Overall, I was happy to run strong with no cramping or other issues.  It was a gorgeous fall day.  You know I'm solar powered -- I was happy to be outside doing something active.  The miles passed quickly and pleasantly, if you can call those last few miles of any half  pleasant.    Even though some of it was due to the added distance, it was still a little hard to swallow being over 8 minutes slower than last year.


The post race party was nice with plenty of food and drink options.  I saw people lined up for massages as well.  I only ate a banana and pretzels as I planned to visit with a family member for lunch.  We hung out a little while and took a few pictures but Teresa and Hubs also had to leave in order to check out of their hotel.  I'll let Teresa tell you about their experience, but let me say I'm very proud of both of them.  They nailed this race as part of their marathon training! 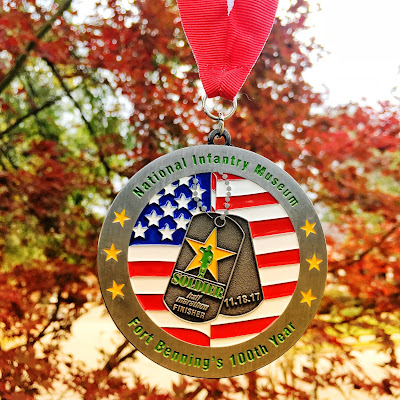 Have you run a race on a military base?


What do you think makes a great race experience?

What are you training for?