Thank you for supporting the NEW Weekly Wrap
and making Wendy feel welcomed.
If you haven't read the updated rules, please do so.
There have been a few changes.

My 4th, 13th, and 30th half marathons were on the beautiful property of Callaway Gardens.  I also love to ride my bike there.  All these halves later, it remains one of the prettiest, and toughest, courses I've ever run.  My best finish time on this course ranks low in my overall times.  It's just always tough.  Seeing I had a long run scheduled for the weekend however, I thought it would be nice to run it again.  If for no other reason...the scenery.  There is just something about this race that is so peaceful; the serenity of those Georgia hills in the middle of the woods.  No crowds.  No traffic.  Just me and the great outdoors.


The day dawned rainy.  When I arrived in Pine Mountain, it was only misting and it looked like the rain would hold off for a while.  It was around 50 degrees but the wind was gusty.  So, I ran in my usual tank and arm sleeves but wore capris.   This is not a large race so parking and packet pickup are always easy.  We received a soft blended T-shirt, but nothing more.  There were real restrooms available; always appreciated. 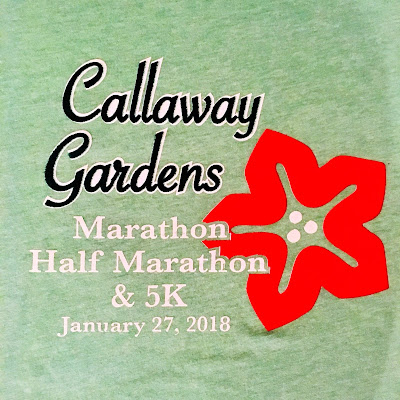 I kept telling myself this was nothing but a long training run.  But with the excitement and the easiest part being early, I began with a pretty strong tempo 5 miler.  I did not stop for water until mile 5.  I knew it would be tough from here on out.

I got out of tempo mode quickly and tried to navigate the bigger hills as best I could.  Some places are so steep you almost have to walk a few steps.  And I did.  I tried to make up time on the downhills.  Not really liking the Cerasport they were serving, I sipped on Coke (chased by water) a few times which is something I've never done.  I liked it.


I still felt relatively strong until mile 10.  At this point, runners enter into the paved trail system.  This part is so pretty but the twisty, windy, up & down narrow trail is hard to navigate.  I began to regret the earlier faster miles and the hills had simply already whipped my butt.  I thought often about my friend Teresa who was running her first marathon.  That motivated me to keep moving.  I sent all the good vibes her way.


So now I'm really insisting to myself that this is a nothing but a training run and slowed down considerably by adding in a few walk breaks.  My right foot was cramping on and off.  It was raining and I only know because I could hear it.  Being under such a huge canopy of trees, I did not get wet.  And the only reason I could hear it -- my music had died during mile 9.  I sang the same song over and over in my head for 3-4 miles.  For the life of me now, I can't remember what it was.

I did not pick it up in the last mile as I normally would but cruised into the finish.  I felt as if I could have gone farther or pushed a little harder.  [Side note: I'm usually gasping and dying at the finish line.  It never fails that a volunteer asks if I'm OK.  Apparently, I usually look like death.  Not this time.]   The announcer was calling out everyone's name as they finished which is always a nice touch. 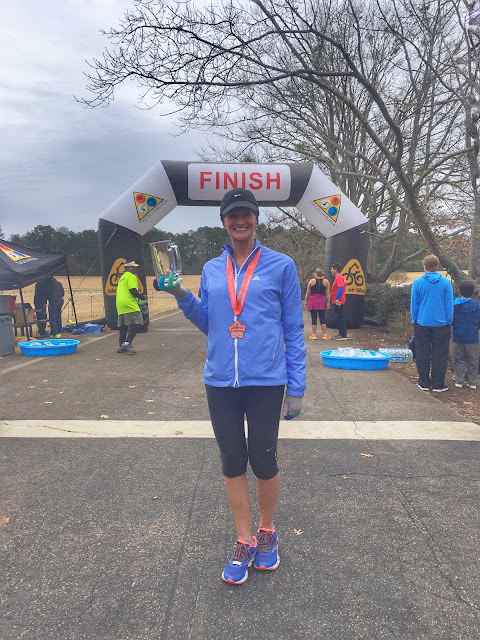 I knew I wouldn't be listed yet, but I checked the results anyway.  I saw two runners in my age group so far.  Could I have placed?  Surely not with a 2:13+.  I ate a few bites of pizza and a mini muffin from the selection of goodies.  It was blustery and damp so I didn't walk around the grounds but hunkered down inside their circus tent.   Officially, I was 3rd of 17 in my age group and received a large and heavy etched glass mug. 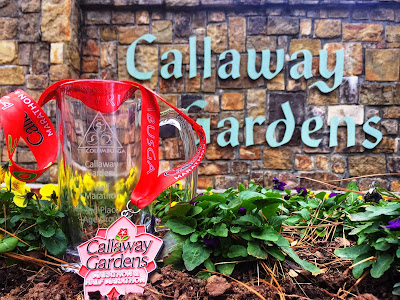 So, mission accomplished.  I completed my long run.  I got in a nice tempo run plus more hill work than I could ever, ever want.  I enjoyed the scenery.   And I now have a mug that would hold more margaritas than I should ever drink at one time.  {Wink}

Tell me what you think about super hilly races!


Have you ever drank Coke during a race?

What is your next race?