I flew from Denver, Colorado -- where the marathon started on Echo Mountain at 10,507 feet -- to sea level on the beautiful, sunny Florida Panhandle.  My intention was to do nothing but lay on the beach for a week to recover.  And... that's pretty much what happened.  Plus, I consumed a lot of seafood.  Piles.

Steep downhill running definitely produces delayed onset muscle soreness (DOMS).  I looked quite geriatric when I moved and the family had many laughs poking fun at me.  However, it was no worse at the marathon distance than at the downhill half marathon distances I'd raced before.  For that, I was grateful.  Perhaps those wall sits helped after all?


The first few days I barely moved from my beach chair.  Walking was difficult...so I did as little as possible.  Mid week, I finally moved from my beach chair to play Frisbee.  I was surprised that it felt good to run around a little in the sand.  Besides, it was the only way I was going to catch that Frisbee in the wind.  There were a couple of after-dinner competitive Putt-Putt games too.  Hey, at least I was on my feet...


By Friday, I was definitely feeling more like myself.  So, our middle son and I went on a flat, easy two hour morning hike in Conservation Park; probably covering six or seven miles.  We did not see a gator.  We (he) found a snake, a tortoise, a bunny, and a black widow spider among other critters in addition to numerous wild flowers. 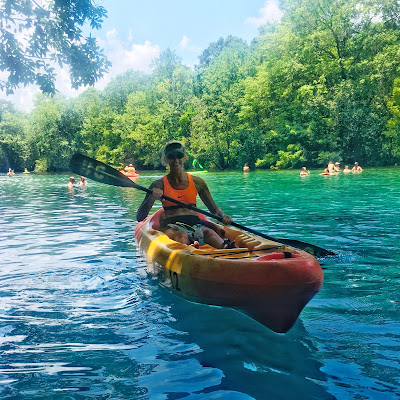 By Saturday I was ready to tackle a new adventure.  The family went kayaking in Holmes Creek where the highlight of the trip is to stop at Cypress Springs.  We swam in beautiful, clear, icy cold spring about 20 minutes into our 2 hour paddling excursion.  We wished we had brought snorkeling gear.  We did see a small gator long after leaving the springs and near the end of our journey.  I paddled a wee bit faster.


After returning home from the beach and settling back in to the normal work routine, I was finally ready to test my running legs on the Wednesday morning of recovery week two.  I kept this run nice and easy.  But on Friday's five miles, I pushed the pace just a bit.


Speaking of testing the legs, they were put to the challenge at the lake on Saturday.  The water became very choppy while we were there, but it was a good start to the season nonetheless.


Sunday morning's 6 mile run wrapped up my week.  I slept late (which felt luxurious) but this run was super hot and humid.  The only thing that got me though it, besides the walk breaks, was the thought of this:

Tell me, what are you training for?  Or, are you just running for fun?

Did anyone have cool runs this week?  (If so, I'm jealous!)

An InLinkz Link-up
Posted by HoHo Runs at 12:00 PM
Email ThisBlogThis!Share to TwitterShare to FacebookShare to Pinterest