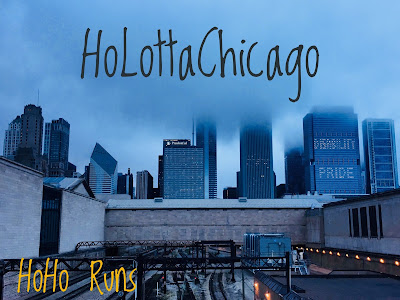 First, let me express my heartfelt thanks to Wendy for being so gracious with her time, her home, her dog, and her Uber services while I was in Chicago.  It certainly made my travels much easier!


Secondly, the bloggers mentioned in this post have already written wonderful recaps of the Chicago Rock N' Roll weekend.  I could simply say "Ditto" and move on.  However, I'll hope you'll stick through to the end.


I had full intentions of taking an off season. I was tired from my latest marathon training cycle and downhill race at unforgiving altitude.  The heat of summer would be perfect timing for some downtime.  When Wendy first mentioned this race, I believe my whiny comment was "But, it's in frickin' July!"  However, I couldn't pass up the opportunity to meet so many fabulous blogging sisters and spend time with my co-host!  So, I clicked the registration button and proceeded to do a minimum of running.  Coupled with a recent illness, my odds of a strong race weren't looking great.

Saturday morning, we met for brunch at Beatrix after some ladies had run the 5k.  It was pure delight to get to know these women in person!  After several hours brunching (and I think we could have stayed all day), some of us went to the expo.   We goofed around with picture props, ate yummy Vice Cream, perused the merchandise and also met the incredibly inspiring Kathyrn Switzer.  She was generous with her time both individually and as a group. 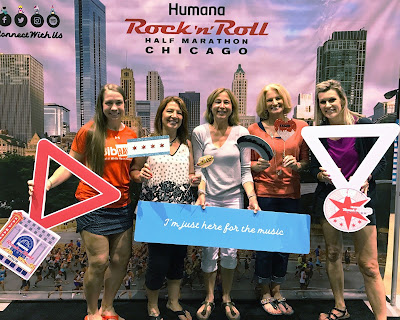 After a 4:00 wake-up call, Wendy and I met up with Marcia at the train station and arrived at the race to the scene at the top.  It was not yet raining and I thought we wouldn't get wet.  The radar actually looked pretty good.  {Bahaha}.  With barely enough time for gear check and a quick porta-potty line, we squeezed into the closest corral.  Within mere minutes, it was raining hard...and we were off.

I stopped my music to listen to the first band, a steel drum band, and I continued to do this for each band along the way.  I enjoyed the music on course!  I knew from running the Chicago Marathon that I could not rely on my watch for pace or distance.  I simply looked at the time that was passing.   I had an unsettling near miss with a heavy bundle of newspapers falling from the sky, but otherwise felt I was having a good race.

With the crowds, and my eyes all-importantly on the road as to not repeat a Chicago fall, I missed the mile markers.  My rain soaked brain thought I crossed a 10k timing plate with 57 minutes on my watch.  I was happy; feeling strong...that is until almost mile 8.  It's there I finally see a mile marker -- MILE 7 -- and realized how off I was.  I walked. The reality was a little hard to swallow.  I picked it back up trying to get back in the mental game.  However, being completely soaked added calf cramping to my already cramping feet and I was forced to walk repeatedly.  It was not my day. 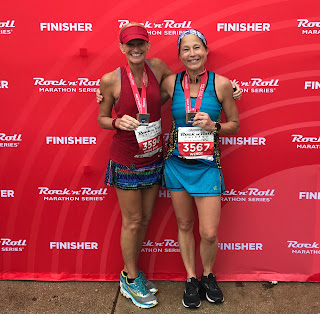 It continued to rain.  Sometimes heavily.  I remember the wind in a few places.  As we closed in on the final miles, I stopped because I wanted pictures of the beautiful skyline but my fingers were to wet and bloodless to operate my phone.  I gave up after a few attempts.  It was not my day.  I ended up running my 2nd slowest half ever clocking in at 2:24.  The reality of that is...I got what I trained for.

Race highlights included rocking along to the bands; one had a nun as a band member and one was singing  Play That Funky Music as I ran by.  I appreciated the on-course Elvis impersonators and even saw a few running with blow-up guitars.  I marveled at a runner in a tight black bodysuit and fishnet tights, was perplexed by a female runner that had written TOUCH on her back, and was freaked out running through a long fall-inducing dark tunnel.


The rain continued after the race.  After being caught out in several deluges, Wendy and I sought refuge in the merchandise tent.  We tried to wait it out but had brunch plans and had no choice but to walk in the downpour to the restaurant.  Even though we changed clothes, there was a puddle under my chair when we got ready to leave.  Again, we could have stayed all afternoon but it was a wonderful way to cap off the race weekend.  The race clock will never be able to define a wonderful weekend spent connecting with friends.


Surprisingly, this was only my second
half where it rained the whole time.

What are your thoughts on rainy races?

An InLinkz Link-up
Posted by HoHo Runs at 4:30 PM
Email ThisBlogThis!Share to TwitterShare to FacebookShare to Pinterest