I won the opportunity to run this half thanks to YoMommaRuns.  The hubs decided to go with me since we had never been to Nashville.  I usually do these sans spouse.  I knew it would be hilly (oh my) but was hoping for cooler temps to help offset the difficult course.

We arrived in Nashville later than planned on Friday but packet pickup was quick and easy.  There was basically nothing in the swag bag other than a not-so-great tech shirt and a magazine.  However, if you were in a shopping mood, there were plenty of vendors.  I had been wanting to try a Handana so I bought a couple of those and then forgot to wear one the next day.  Duh.

The foot cramps I had overnight were perhaps, in hindsight, an omen of things to come.  Race day started with a headache.  Seriously?  Ugh!  Once I ate, took Advil, and walked from our hotel to the start at the Country Music Hall of Fame I was feeling somewhat better.  Sadly for me, it was WARM.  {Insert Meltdown Here}.  Bag check was simple and quick.  There were plenty of porta-potties available and everyone seemed friendly and relaxed.  Ahead of me in the corral was a group dressed as a bride, complete with veil and bouquet, and her matching bridesmaids all in black.  Cute idea.  Is the wedding today?

After The Voice's Amber Carrington sang an awesome national anthem, we ran up (yep UP!)Broadway past all the honkytonks.   This was super cool (and how we fantastically passed our time afterwards -- had a blast!).  My knee had been bothering me and it hurt from step one.  Wah-Wah.  I made a deal to give it 3 miles.  At mile 3, it was fine and I never thought about it again. Whew!!  Oh, but other things went wrong: a stitch in my shoulder (Am I the only person who gets these?  Is it an overwhelming urge to burp?), the temp only got warmer, and I was gifted with calf cramps in later miles - even though I took 3 salt caps.  What the heck?  And the hills kept a'coming.  You know it's going to be rough when sweat is dripping from your elbows at mile .8 (point 8)!  Whine.  Whine.
﻿﻿﻿﻿﻿﻿﻿﻿ 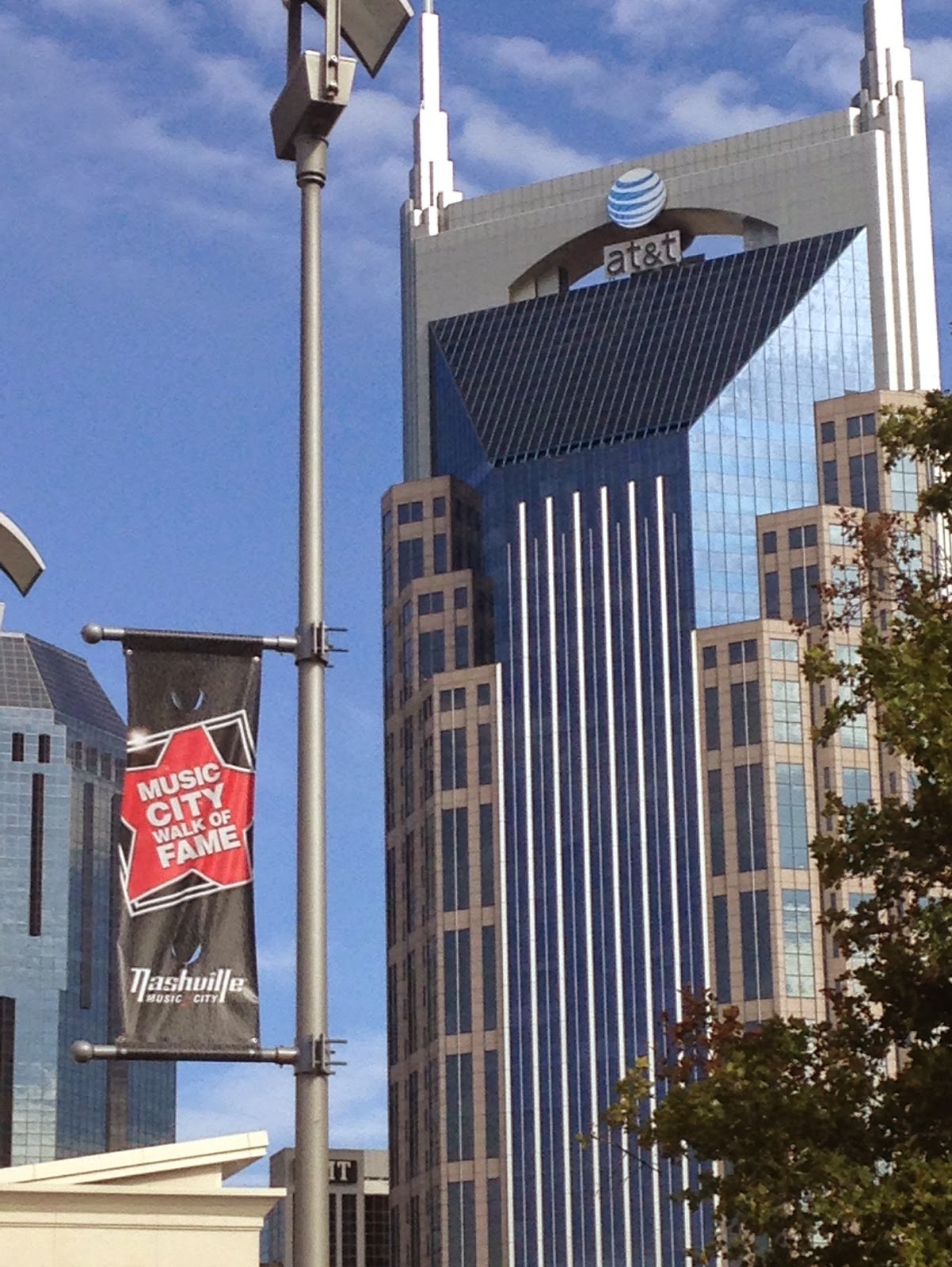 Around mile 7, I quit throwing my pity party...it's no fun to party alone anyway...and decided to just enjoy the race.  I high fived every spectator, cheerleader, and little kid who stuck their hand out...even a teeny tiny batman.  I texted the hubs so he wouldn't think something was wrong.  I tried to switch gears and just think of it as a long slow training run (you know - for the next half).  We ran through a couple of college campuses including Vanderbilt.  For several miles, we ran a long wide avenue flanked with beautiful, grand homes.  When my calves cramped, I walked.  When they stopped, I ran.  Back in the downtown area, I enjoyed running down 2nd avenue past the numerous restaurants.  As I rounded the corner to the finish, I was forced to walk again due to cramps.  I look up and see the hubs taking my pic.  Oh, no!  I wanted to finish strong!!  I tried to run but only made a few more steps.  I posted one of my worst times ever.  And it was fine.

Two things I would change about this race are 1) the horrid electrolyte drink served and 2) a race bib that was simply too large - large enough to be in the way.  But, there was so many more positives.  We had plenty of water stops and tons of crowd support. TONS.   Every street was closed.  No one-laners for us.  Sweet.  [Think about those logistics in a big tourist city.]  The support we received was truly spectacular.   Never having been to Nashville, this was a great way to see the city. 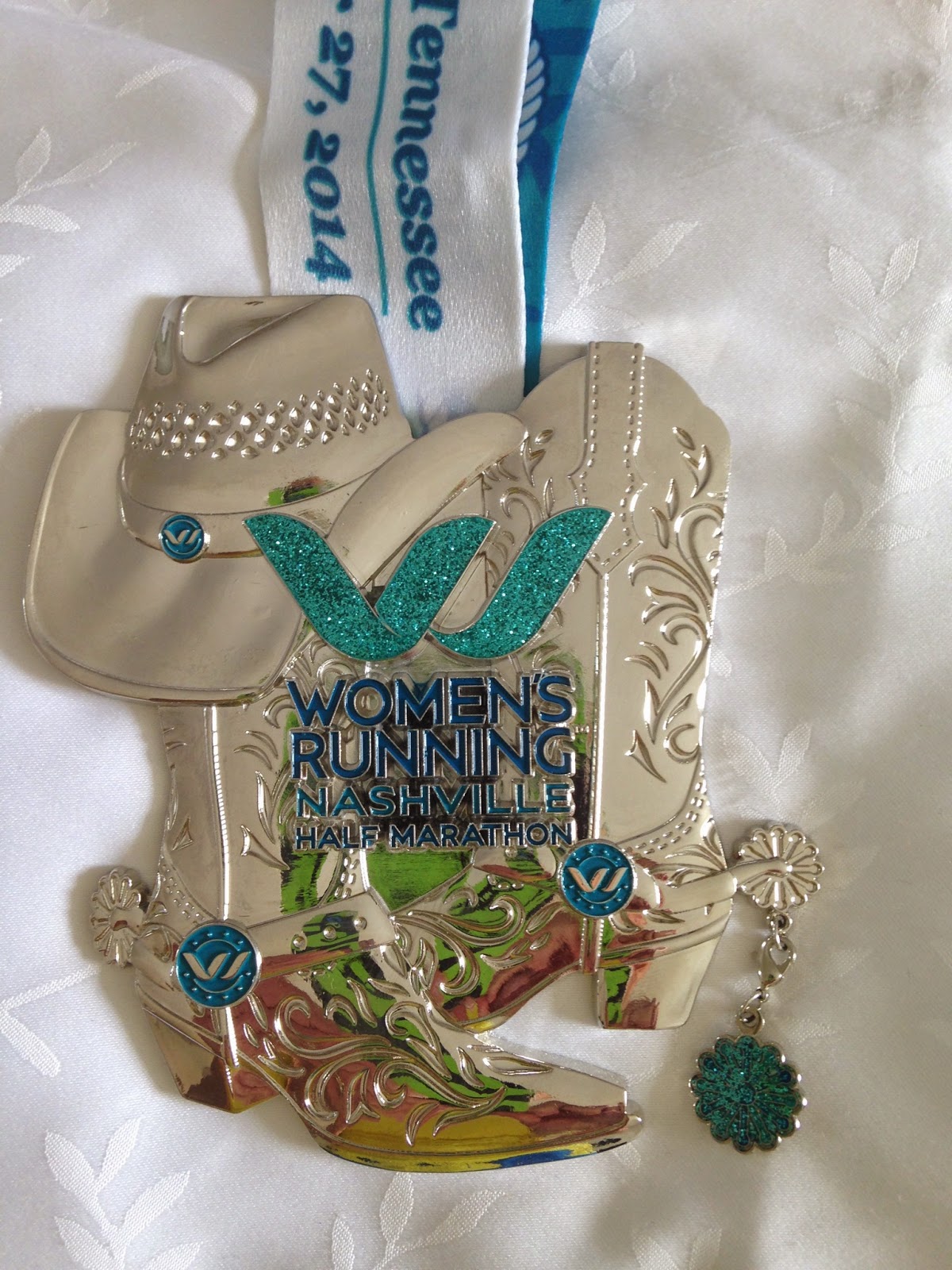 The finishers medal is enormous and includes a keepsake charm.  We had the typical banana and bagel in the finishers chute.  The post-race festivities were held at the Music City Walk of Fame.  Mimosas were served (Can I just stay here? Also, thank you security lady who asked for my ID - you made my day!) and there were many other tents which I did not visit.  I did see a massage tent and no doubt there were other food items.  They were also offering yoga sessions as a way to stretch post-race.