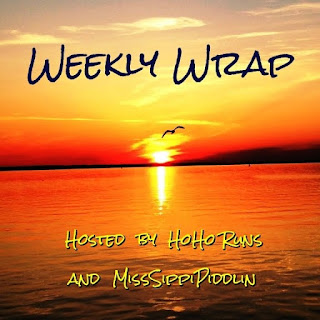 
This week was a weird try-to-run-but-also-taper-for-triathlon scenario.  I cut out my double workouts.  For the last month or longer, I've been swimming most nights after my evening meal settles.  I didn't do that this week and took rest days on Thursday and Friday (except for a short swim Thursday morning).  On Sunday, I finally got my first double digit run completed since mid May.  Now I feel much better about my marathon training.  Weekly run miles = 25.

My Capital of Dreams Sprint Triathlon day started early.  After racking my bike in transition, I had some time to kill.  I scoped out the bike in/out locations, run in/out locations, ate my banana, and went down to check the riverboat and swim area.  I was treated to a gorgeous sunrise.   Racers had to board the Harriett II, an beautifully elegant 19th century riverboat, by 7:00.

The riverboat would take us to the swim start where we had to jump from her lower deck into the water.  Who gets to do that?  Actually, they announced only two races in the US start with a jump from a boat!  This race is always limited to the number of people that will fit on the boat.  Each swimmer would jump in about 5 seconds apart.  The Harriott II would proceed up the river to take the Olympic distance racers to their swim start. 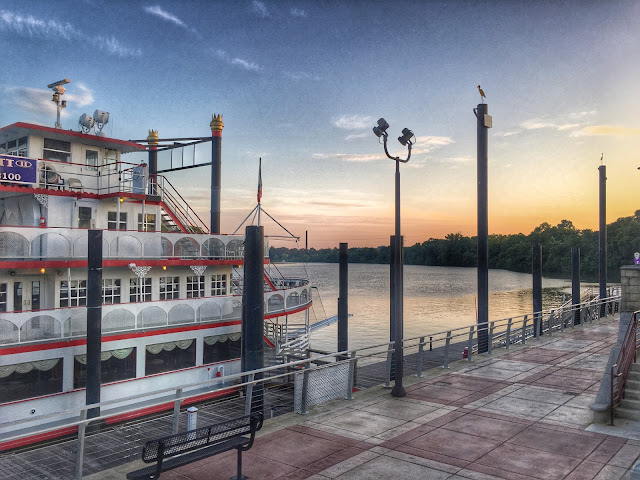 My goal for the swim was to remain calm, breathe in rhythm, and control my heart rate.  I've done so much extra swimming this past month including three open water swims and had high hopes of a great swim leg.  Spoiler...that didn't happen.  I am at ease in river water, lake water, and deep water.  It wasn't that.

Last year, the river current helped swimmers clock some fantastic times.  I was counting on that, maybe a little too much. As I waited on my turn to jump in, my HR rose quickly as the director yelled to signal jumps "GO 89... GO 90... GO 91... "  Whew, the actual jump was not bad.  But once I started swimming, I didn't seem to be going anywhere. My HR was already high and where was that river current?  Nowhere to be found.  In fact, I think we were swimming against it!  The results indicate the swim times were much higher than last year.  And mine?  Extra "not good".  I still can't fathom the length of time I swam!  Swim = 14:40   {Ugh!} 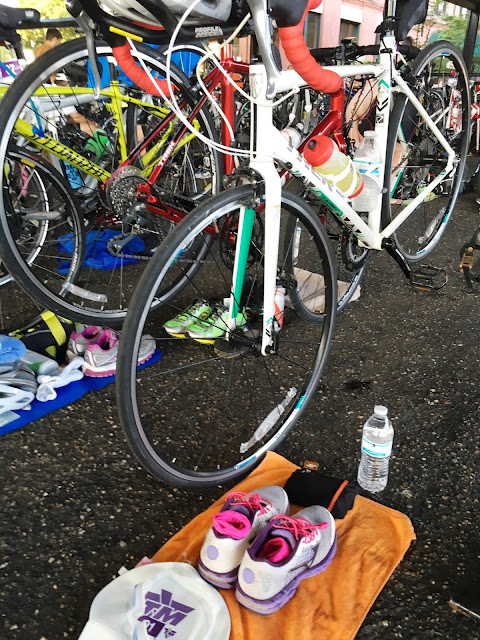 It was a loonnngggg way from the end of the swim to the transition area (with ramps and stairs no less) so I knew the T1 time would be high.  I jogged as best I could on bare feet, removing my swim cap and goggles, and fixing my ponytail as I went {priorities, people!}.  I put on my race bib, helmet and Garmin -- remembering this time to wake it up!  I dried my feet quickly and put on my socks and shoes while standing.  I ate a GU, drank Gatorade Endurance, took my bike off the rack and was gone! T1 = 4:59 {Ugh!}

Obviously at this point I can tell I'm way behind.  The whole place was cavernously empty.  I decided not to fret about it, do the best I could and enjoy it.  The bike route was flat except for a significant hill over the Interstate which we had to cross going out and again on our way back.  It was not particularly scenic and on a coned-off lane of a busy highway.  I didn't notice the heat as I was making my own breeze.  I only drank probably 12 ounces of GE on the bike. Thankfully, I passed a handful of racers during this leg. Always satisfying.  One young lady I passed multiple times and she continuously blocked the left side. I later saw she was awarded with several penalties.   I hoped to maintain a speed over 15 mph.  My Garmin reported an average speed of 16.7 mph. Yes!!  Bike = 45:50 {Yippee} 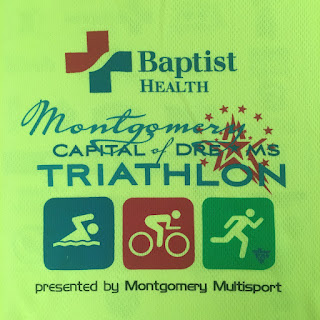 Back in transition (which was housed in an old train station -- and thus very LONG), I racked my bike and took off my helmet.  I fixed my ponytail {again, priorities!}, swallowed a salt capsule, drank more Gatorade Endurance, and grabbed a GU to take with me.  T2 = 2:19  {Meh}

I've run countless races downtown and knew exactly what the run would be like.  HILLY.  The route went up over 120 feet, mostly in the first mile or so.  I also knew there would be a nice downhill.  It is pretty around the capital and state buildings so I can report this leg was historic and scenic.  The plan was to go slowly in the first mile, eat my GU, and locate my running legs.  They show up about a half mile in.  I stuck to that plan pretty well.  By this time, the feels-like temp was well over 90 degrees.  I dumped ice in my top at the water stops and tried to make up some of my slow first mile on the downhill section.  Gamin splits: 11:19 / 9:29 / 9:39 / 7:52  Run = 30:58  {Mmm...OK} 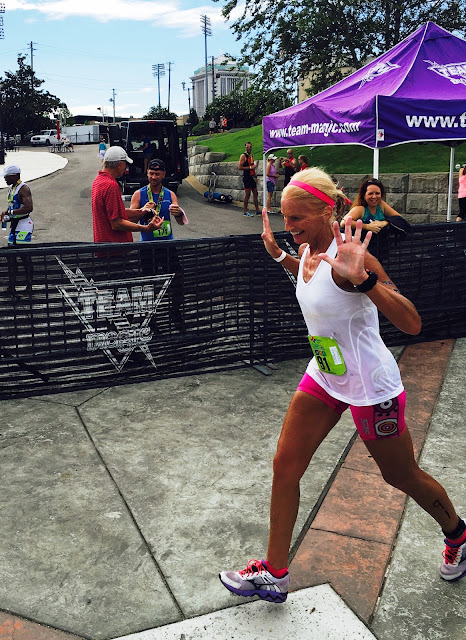 My official finish time was 1:38:48.  Although disappointed with the swim, I was quite pleased with the bike leg and the run leg was OK too -- considering what had proceeded it.   I was nowhere near the podium on this race.  In fact, it may be the first time I've placed absolutely last in my age group. Ha!  I did beat some younger folk.  Always satisfying. 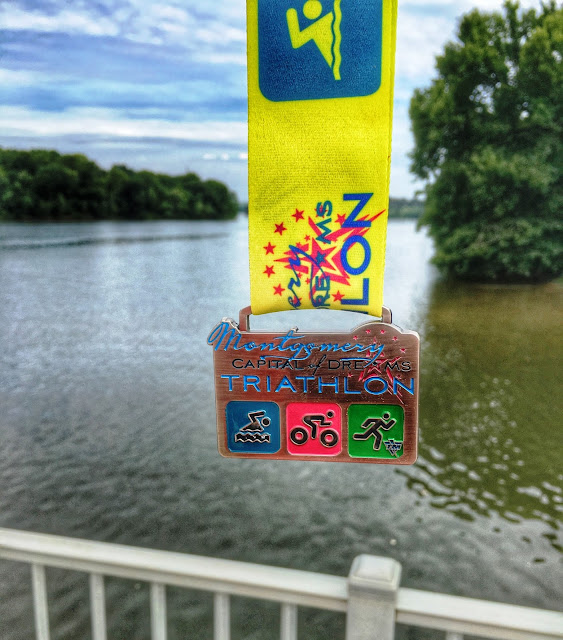 I still consider this a win!  * For completing my second sprint triathlon.  * For being able to push myself in different ways. * For being healthy and injury free.  * For enjoying the great outdoors on a beautiful day.   I can't complain.