I'm irritated that I'm irritable.  I've felt this way for a while.  I don't want to feel this way, so that just becomes another irritant.  But, instead of harping on my specific day to day irritations -- clearly due to gender, age and stress, I thought I'd touch on the marathon I just ran because it's fresh in my mind.


Do not misunderstand, Chicago is a beautiful city.  I had a spectacular weekend, met some incredible people and will talk about all the lovelies and goose-bumpy feels in my race recap.  Running the Chicago Marathon was a tremendous opportunity and one I'll be forever grateful for.  But yeah, there were a few things that got under my skin.

Upon my arrival Friday, I spent more time in a cab in gridlocked traffic than I did on the airplane.  In fact, time got so tight I was afraid I'd miss the Meet Meb and Sarah Crouch Event sponsored by Generation UCAN that I was lucky enough to be included in (thank you Marcia!).  Last minute, I asked the cab driver to take me straight to the expo instead of my hotel, where I proceeded to drag my baggage around for many hours.  I apologize to everyone I hit with it!   On top of that, I felt covered in airport/cab grime and stench.  Hopefully Meb, Sarah nor my blogger buddies noticed.


I was also irritated to be placed in one of the last corrals.  Honestly, I think this was due to my DNS last year as my estimated finish time for this year did not warrant it.  I kept telling myself it didn't matter.  But did it?  Not only did I have to dodge the expected throngs of people running a different pace, sewer caps, grates, bad pavement, discarded clothing and accessories, and maneuver through the seas of discarded drinking cups and whatnot -- but I also dodged spectators.  Spectators!  Too many times to count, they crossed right in front of me to reach the opposite side of the street.  Bad spectator etiquette!  Bad.


I admit after my ever-so-graceful swan dive into the pavement in mile 12 or so, I was not the most pleasant person at the first aid station.  I kept barking at them to hurry up!  They wanted me to sit down but I refused.  After an eternity they got the bleeding stopped, or at least slowed enough to wrap my knees.  Then, they proceed to whip out what appeared to be very wide, clear packing tape.  Once again, I was less than kind.  "I can't run with that around my knees!"  "Ma'am we don't have bandages wide enough."  "Don't you have some gauze?"  On and on and on...an irritable black hole of time!  {I did thank them profusely when I was free to go.}


Again, don't think my Chicago Marathon experience was a bad one.  In fact, I highly recommend it. There were so many positives which I promise to get to later.  But today's Wednesday Word is IRRITABLE -- which was apparently suggested by me at some point.  So BOOM, there you go!  A dump truck full.

Does anything make you irritable?

I'm linking up with Deb @ Deb Runs for the Wednesday Word.


Please visit Deb and the other participating bloggers.  It's fun! 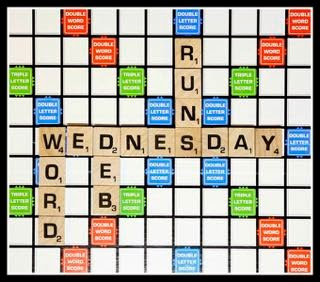 Posted by HoHo Runs at 6:25 AM
Email ThisBlogThis!Share to TwitterShare to FacebookShare to Pinterest