This was my third trip to Birmingham for the Mercedes Half Marathon.  Wendy did a great job recapping her race from a first timer's perspective so be sure to check that out.  We stressed over the Chicago snowstorm for a few days, but ultimately Wendy arrived after only a short delay. Next, we stressed over the 100% rain and thunderstorms race day forecast.


After brunching at First Watch, we went to the expo where we hung out while it rained.  I'm glad we were staying at the Westin Hotel as it connected to the expo site.  We had fun perusing the vendors, sampling the local craft beer, sipping Tailwind, and making silly photos.  Lots of silly photos.  My friend Valerie (#icecreamrunner) was due soon so we stayed until she arrived.  And...it was raining outside.  What else were we going to do? 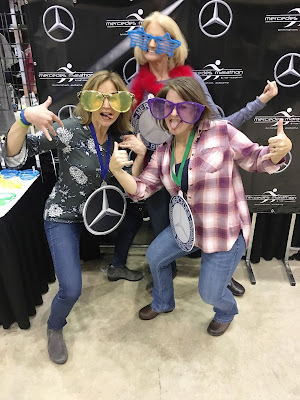 In the late afternoon, we did a little sightseeing and previewed some of the course.  Yes unfortunately, the hills had not moved.  It was very windy atop The Vulcan tower...enough to make me weak in the knees.


After attempting to eat at a restaurant near our hotel, we gave up as the wait times were ridiculous.  We dined at the Westin where I ate delicious chicken pot pie.  We were both happy with our dining choice.  Back in our room early, partiers that we are, we were nodding off before nine.  It had been a long stressful day of travel and weather worries.


Race Day!  We checked the radar and it appeared we would run between storms.  HOORAY! Oh...wait. That means; humidity from hell.  {Cue deflating balloon noise.}  I mentioned to Wendy that I usually cramp in high humidity.  Why, oh why did I say that out loud?  We walked a few blocks and were in the starting swamp chute within minutes.  I heard someone calling my name.  Valerie and others were already there. 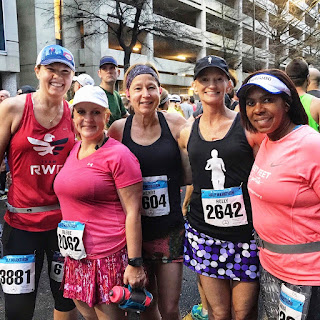 Wanting a 2:10 finish or less, I started conservatively.  My plan was to save energy for the large hills on the back side and push my pace on the downhills.  At mile two, it started raining.  The thing I stressed most over...felt fantastic!  It was brutally warm and swampy without the rain.  It didn't last very long, unfortunately.

The first five miles were all 9:xx and I felt on target.  Then, I hit the first steep hill at 8 o'clock.  I know because we ran by a church with chimes announcing the hour.  The humidity was brutal.  I took a walk break to regroup, let my heart rate settle and eat a GU.   For a hot minute, I felt a little defeated.  The crowd support is always phenomenal for this mid-sized race, reminding me of Route 66 in Tulsa.  Their cheering energized me and I managed to get my head back in the game.  Val and I swapped places over and over.   That big downhill section in mile 9 is so much fun!   I let it fly. 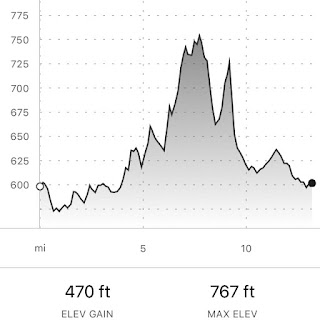 In mile 10, the cramps started -- even though I had taken salt caps, drank electrolytes, and eaten GU.  High humidity gets me every time.  And...I had already jinxed myself.  They started first in the feet (which I can handle) and then moved to my calves.  Every time I had one in my calf, I stopped in my tracks.  Literally.  On my Garmin, it appears I came to a screeching halt 5 times.  The last seize was right before the finish line.  Mere feet.  How comically awkward.  Total spaz.

Valerie arrived shortly and Wendy wasn't far behind.  They had the usual fruit and hydration in the finishers area.  This race gives out a finishers award and this year it was a large wrap towel.  I ate a banana for potassium and after a few pictures we headed inside (thankfully, because -- more rain!) to the after party. They served a BBQ sandwich with coleslaw and chips.  Since we were in no hurry, Wendy and I kicked back, sang along with the band, and enjoyed the after party for a while.  I'm so happy my friend and co-host flew south to run this race with me!  Sharing this experience with her makes it even more special.


The thing I find so addictive about running distance races is this:  You never know what you'll get on race day.  It's the challenge of facing what the day brings; somehow digging deep to make it work; doing what it takes to cross the finish line (even if you're stopped short with cramps).    If it were effortless, I have no doubt I'd lose interest.


After 52 half marathons, this race still remains a favorite.  The course itself is entertaining, winding around the downtown area plus showcasing different outlying neighborhoods.  The direction and amenities are top notch.  Let me add, in past years it felt more like a winter day.

Have you ever been to Birmingham?  Visited the Vulcan?


Anyone else cramp in humidity?  I'd love to ear your solutions!