The week began with the Labor Day holiday.  Par-tay!  I was hoping for a second day of water skiing.  But, after being stung 7 times by yellow jackets Monday morning...that didn't happen [cue deflating balloon noise].  I learned from Dr. Google that yellow jackets can both bite and sting.  And unlike a bee that stings only once, they sting multiple times.  I wasn't worried about an allergic reaction.  After all,  I grew up in the country and have been stung by everything imaginable.

However, those sting locations were on fire; the worst two being behind one knee and on top of the other.  If you are curious, I had on long sleeves and pants to avoid mosquito bites while working in the yard.  I was stung through my clothes.  I'm sure I looked quite comical: running toward the back yard, slapping at myself to kill the attached evil buggers, and trying to peel out of my sweaty clothes all at the same time.  Anyhoo, I did not sleep well for a couple of nights and did not run until Thursday morning.   After taking last week off from running, this was just an easy and slow 4.5 miles. 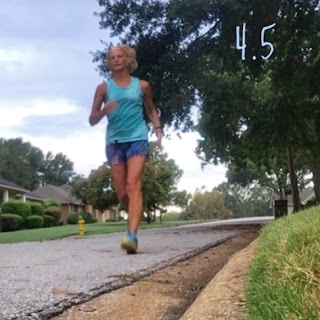 I returned to the streets Saturday morning where I pushed the mileage to 6.1.  This run was one of the hottest I've done all summer.  Why yes...I know I say that all the time.  But I swear, it was.  I swear. Kidding aside, I am happy not be training right now and will do nothing but easy base building runs for the next few weeks.


I did two of my typical pre-hab sessions this week and went for a 21 mile bike ride for cross training Sunday morning..  It was so August Hot, I just couldn't believe I was seeing Halloween decorations already.

At least I can report the week ended better than it started!

When is the last time you were stung?  By what?

Are you training, base building or just maintaining?


Any cyclists out there?  What's your favorite distance to ride?


An InLinkz Link-up
Posted by HoHo Runs at 2:50 PM
Email ThisBlogThis!Share to TwitterShare to FacebookShare to Pinterest