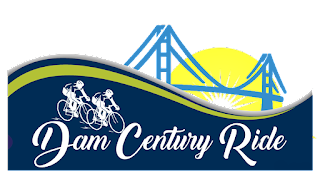 My apologies in advance.  Riding over 100 miles is going to create quite the lengthy recap.  I hope you'll hang with me to the end.  I mentioned in HoLottaMiles that we had started about 30 minutes behind most riders.  It was a little hairy going through traffic stops in Tallassee, mostly because Teresa and I were still nervous I think.  We crossed the DAM for which the ride is named and once on rural roads, we settled into a rhythm.
Except for being chased by a dog, things went smoothly.   Of all the things we fretted over, dogs were something neither of us considered.  I announced to Teresa we were 10% done.  Little did she know I'd be yelling out my percentages all day (along with our average speed).  The most disturbing thing I saw was a dead raccoon with a plastic fork placed on top.  Disturbing, but somehow weirdly funny.

I wanted to document each rest stop and the volunteers were happy to oblige.  As we were leaving, we were told to look for the kiwi farm.  Kiwi?  Growing in Alabama?  Who would have thought...  The kiwi farm was lovely as were the countryside, farms, pastures, small churches, cemeteries, ponds, swamps, and woods we passed.  We conversed.  A lot.  We're women.


We broke the ride into segments between stops.  Otherwise, it'd be too much of a mental bite to chew.  During Segment 2, my singing started.  I sang up every hill.  Elton John's Don't Let the Sun Go Down on Me was stuck in my head -- so I let it out.  Nothing significant happened except for losing my magnetic pouch after hitting a huge bump flying downhill on rough pavement back into Tallassee.  It almost smacked Teresa in the face.  I went back to retrieve it but not before a car smashed my Advil, Salt Capsules and Goldfish.  I would have to bum off Teresa.  After crossing the DAM again, it was time for Rest Stop 2.


Here, we were told we were the back of the long distance riders and that someone would be following us for the remainder of the race.  Aren't we special? I didn't notice our SAG vehicle and it's possible he skipped ahead to Rest Stop 3 to wait.  If not, he sure kept a respectable distance.   It was in Segment 3 that my obnoxious singing started.  There were hellacious hills and it was getting HOT.  I had switched over to John Denver's Sunshine on My Shoulders and I belted it out up every mountain for distraction.  {Your welcomed, Teresa!}
With big uphills came big downhills and we wheeeee'd our way down eventually clocking a maximum speed of 36.9 mph.  Dang that was fun!  There were a few Deliverance type moments--complete with banjo sound effects, many cotton fields--complete with singing Dixie {yes, Teresa gave in and started singing with me} and finally we reached Rest Stop 3.  We were around mile 40 and knew we'd have to make the Metric/Century decision soon.


The group at this stop went overboard to make us feel welcome.  They racked our bikes, filled our bottles and gave us crack (chocolate candy, peeps).  With cramping already in my foot, they served me a cup of pickle juice.  It did the trick.  I stuffed food in my pockets, but can't tell you now what it was.  I sent PoPo a message we were OK and off we went.


Segment 4 had the worst traffic.   We received a few irritating "honks"  It was flat and we began missing the early hills; no whee's to rest and enjoy.  Constant pedaling.  Constant...with a head wind.  We cycled over a river, along double railroad tracks, saw golf courses, a casino, and a prison.  We pushed on and after crossing the Interstate -- there they were; the big arrows pointing us either back to Tallassee for the Metric distance or on through HELL for the Century.  Well, you know what that decision was.  We giggled a while because Teresa imagined SAG Dude thinking "Oh, crap -- they are going the full distance!"  We were sure he'd rather been watching football.
After a beautiful stretch of homes and farms, we reached the fluid only Stop 4 around mile 58.  {We're 58% done, Teresa!}  The volunteer was an IronMan who had Gatorade and Water on the tailgate of his pickup.  We did not document this stop.  I think we were getting delirious.  However, we made sure SAG Dude was well hydrated (ha ha).


Segment 5 was Hell on Earth.  It was so freaking hot with the sun directly over our heads.  However, I did a little celebratory seat-wiggle dance after surpassing my PR distance of 65 miles.  We were in the middle of nowhere.  I remember singing Garth Brooks, Kenny Chesney, and Zac Brown to name a few.  We were completely delirious and couldn't remember more than a couple of lines of any song, but that didn't stop us.

We talked (again!) about what we'd eat later at the Mexican restaurant and how big our margaritas would be.  My feet felt like they were on fire!  The road kill was bad.  Some were unidentifiable; one with weird hooves.   Had Bigfoot ran out of the woods, we wouldn't have batted an eye.  He could have hopped a ride with SAG Dude.  We shared some gummies Teresa had stuffed in her pocket.


Finally, we arrived at rest stop #5!  {We're 70% done, Teresa!}  I was getting that WE DID IT feeling although we had over 30 miles to go.  The sweetest people were sitting on the front porch of the church parsonage waiting for us to arrive.   An INDOOR stop with air conditioning almost brought a tear to my eye!  WHAT a spread of food! -- OMG at the homemade Pecan Sandies.  We made ourselves go to the restroom for the first time even though it was not necessary.  Being so hot, it was difficult to eat and I stood over the A/C vent in the floor.


It was hard to leave knowing we had to go back the way we came; back through hell.  Another "I'm OK" text and we were off.  I can't remember much of Segment 6.  There was more singing and cursing too.  A big group of fat tire motorcyclists passed us.   We were sent down the worst road imaginable with rocky pavement, huge buckles spanning the road with deep potholes nestled inside.  We won't discuss our potty mouths every time we hit a brain jarring bump.  But as Teresa pointed out, it was shady. After an eternity, we arrived at the last stop.  Teresa convinced me to drink in a Dr. Pepper (hoping for a burping contest -- no such luck).  I can't tell you how good that tasted.


With about 17 miles left for Segment 7, we sang Johnny Cash (a lot of Cash) some Elvis, crossed back over the Interstate where I convinced an 18 wheeler to blow his horn and we pedaled on.  {We're 90% done, Teresa!}  In the distance, we saw an ominous cloud.   Rain?  Really?  Now?  Maybe it would go in the other direction.  Oh, no no.  It stormed.  We were soaked in seconds.  There was nothing to use for cover.  I'll admit there was some repenting going on -- you know, just in case.  We pulled up to a stop sign that was whipping back and forth from high winds and two SAG vehicles soon caught up to us.  "Do you want us to take you back?"  NO WAY.  We sat drenched in the vehicles until the wind died down.

Back on the bikes, the storm left much cooler air in its wake.  We appreciated that and the fresh, just rained smell.  I had gotten cold while off my bike and my inner thigh kept threatening to cramp. Thankfully it never made it all the way.  More cotton fields.  We steeled ourselves for the last DAM hill.  We knew it would be a doozie.   And ... success!   One.hundred.three.freaking.miles. 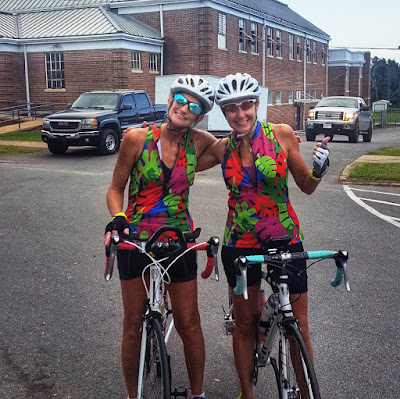 PoPo took us to our favorite Mexican restaurant where we indulged.  Homemade guacamole, made right at our table, tasted like heaven on earth.  That actually could have been our meal, but we didn't stop there.  And the margarita?  Well...

Thanks for making it to the end!  Be sure to check out Teresa's recap as well.  A special thanks to everyone associated with this event.  It was perfect for our first century.  A big shout out to all of you who sent encouraging messages throughout the day (especially you PoPo!).  Knowing we had that positive energy coming our way helped more than you can ever know. Oddly, we rarely even looked at the time.  It's almost as if it didn't exist.  We had a job to do and we just did it.  And Teresa, what can I say?  Thank you, my friend.  It was a DAM good time.