For the first time in I can't remember when (10 Years? Maybe 15?) I got sick.  Very sick.  Sore throat, fever, non-stop coughing.  Ugh.  Sitting in the hot sun watching the Little League state championship playoffs from Friday through Tuesday did not help.  In case you missed the news, our grandson's team won at the state level and will be playing in the Little League World Series in North Carolina.   Go AUM Green!

By Wednesday, I felt a little better and went to work. The ladies at the office followed me around with a can of Lysol Disinfecting Spray.  Ha...you think I'm kidding.  My voice was almost non-existent.  I can't really blame that ALL on my illness.  I had screamed like a crazy HoHo for five days straight; sore throat be damned. 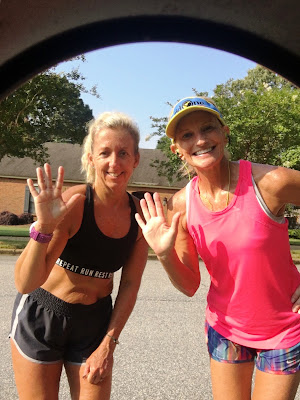 I planned to run Friday morning.  Really, I did.  But still feeling exhausted, I did not get up.  My running mojo was nowhere to be found.  Saturday I made plans to run with a friend, hoping that would be the kick in the pants I needed.   Again, I felt utterly exhausted.  The feels like 90 at 6:30 was unkind to me.  I had to stop repeatedly but was grateful for the company on this short run.


Sunday morning was spent at the lake.  I was finally able to ski behind our new boat  The conditions were perfect and I loved every second of it.  Enough said.


So, I'm heading to Chicago for the Rock N Roll half marathon.  Who knows how that will go.  I did not get my last long run done and truth be told -- even before getting sick, I'd only made a feeble attempt to run the miles I should have.  I know it will be a fun trip regardless of what happens.

When is the last time you were really sick?

Would you run a half marathon if you knew you were not prepared?

An InLinkz Link-up
Posted by HoHo Runs at 1:31 PM
Email ThisBlogThis!Share to TwitterShare to FacebookShare to Pinterest